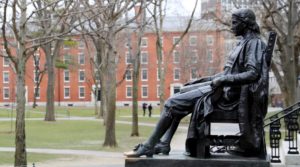 Just two days after federal officials barred international students from attending U.S. colleges that go online-only this fall, Harvard University and the Massachusetts Institute of Technology have made their objections clear. They sued the U.S. government in federal court Wednesday, seeking to have the U.S. Immigration Customs And Enforcement policy reversed and declared unlawful.

In the complaint, the schools condemn the agency’s “arbitrary and capricious” decision.

The federal policy announced Monday means that college students studying in the U.S. on F-1 visas will not be permitted to stay in the U.S. or reenter the country if their school opted for entirely remote learning in the fall.

According to Harvard and MIT, the policy would effectively strand hundreds of thousands of international students studying in the U.S. and muddy plans for a return to class amid the coronavirus pandemic. They say the move “reflects an effort by the federal government to force universities to reopen in-person classes,” regardless of what’s best for community safety.

“The effect — and perhaps even the goal — is to create as much chaos for universities and international students as possible,” the universities said.

The lawsuit names ICE and its parent agency, the Department of Homeland Security, among the defendants, as well as acting Homeland Security secretary Chad Wolf. ICE declined to comment to NPR “due to pending litigation.”

“Through this guidance, DHS is seeking to maximize flexibility for students to continue their studies,” the agency said, “while minimizing the risk of transmission of COVID-19 by not admitting students into the country who do not need to be present to attend classes in-person.”

This is not the first time that Harvard has butted heads with the Trump administration over its response to the coronavirus. The university announced Monday that all course instruction will be delivered online during the coming school year — a decision Trump criticized as “ridiculous.”