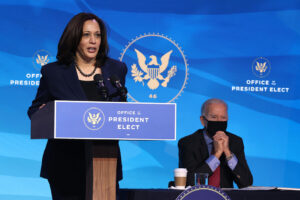 The vice president-elect also said the new administration would try to decrease by five years the time required to obtain citizenship.

Speaking with Univision’s Ilia Calderón, Harris teased a sweeping immigration reform bill that her and President-elect Joe Biden’s administration plans to introduce. Harris said their bill would grant green cards immediately to immigrants protected by the Temporary Protected Status and Deferred Action for Childhood Arrivals policies. She added that the administration would also try to decrease the amount of time required to acquire U.S. citizenship to eight years from 13 years by making the naturalization process more efficient.

“It’s a smarter and much more humane way of approaching immigration,” Harris said of their legislative plans.

Harris also said they hoped to add more judges to relieve a backlog on immigration cases — a problem that President Donald Trump frequently used to justify stricter controls at the southern border.

Harris’ comments come just before a group of undocumented activists from across the country plan to join with local faith leaders in Wilmington, Del., on Wednesday morning to demand a meeting with Biden. They plan to pressure him “to make good on his campaign promises, and to act immediately when he takes office next week to protect families,” the advocates said.

The immigrants, organized by the groups RAICES and the Immigrant Justice Network, have not yet received a response to their requests for a meeting with the transition team, in which they hope to push for Biden to go beyond his pledges for a temporary moratorium on deportations and the swift rollback of some Trump administration rules and executive orders.