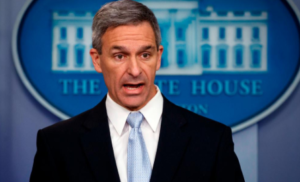 In Fairfax County, where Ken Cuccinelli got his political start, Republican Committee chair Tim Hannigan sees four maps every day on the walls of his office. They are his county, sliced into voting districts. And each tells the same grim tale:

“We’re down nine to nothing on the state Senate districts, we’re down 16 to one with the House delegates districts here, we’re down eight to two on the Board of Supervisors … and we’re down three to zero in the Congressional districts,” Hannigan says. “We’ve just gotten steadily worse here over the last 20 years.”

Cuccinelli has ascended to a position of national influence as acting Director of U.S. Citizens and Immigration Services. But in his home turf of Northern Virginia, voters have turned away from the conservative policies he champions. Virginia holds statewide elections in November and voters will decide on all 140 General Assembly seats. Republicans are split on whether Ken Cuccinelli’s legacy will help or hurt them as they defend slim majorities in both houses.

“As long as the Republicans are perceived by voters as the anti-immigrant party, they’re going to have a great deal of trouble attracting the votes of minority voters, immigrant communities, who are the fastest-growing segments of the electorate and in much of the country too,” says Mark Rozell, dean of the Schar School of Policy and Government at George Mason University.

Tom Davis represented Virginia in the U.S. House of Representatives when Cuccinelli first ran for state Senate in 2002. As a moderate Republican, Davis says his colleagues were put off because Cuccinelli was “so hard right.” But Davis says he helped the aspiring politician win the race after a bruising primary.

“A lot of Republicans wanted to walk from the race,” Davis says. “I said ‘Guys, we’ve got to hold the seat.’ So I came in, we gave Ken some money, propped him up and he won the seat.”