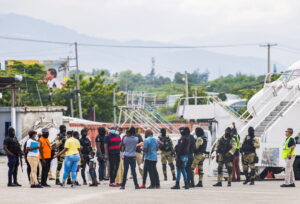 PORT-AU-PRINCE, Haiti — The first Haitians deported from a makeshift camp in Texas landed in their home country Sunday amid sweltering heat, anger and confusion, as Haitian officials beseeched the United States to stop the flights because the country is in crisis and cannot handle thousands of homeless deportees.

“We are here to say welcome, they can come back and stay in Haiti — but they are very agitated,” said the head of Haiti’s national migration office, Jean Negot Bonheur Delva. “They don’t accept the forced return.”

Mr. Bonheur Delva said the authorities expected that about 14,000 Haitians will be expelled from the United States over the coming three weeks.

An encampment of about that size has formed in the Texas border town of Del Rio in recent days as Haitian and other migrants crossed over the Rio Grande from Mexico. The Biden administration has said it is moving swiftly to deport them under a Trump-era pandemic order.

On Sunday alone, officials in Haiti were preparing for three flights of migrants to arrive in Port-au-Prince, the capital. After that, they expect six flights a day for three weeks, split between Port-au-Prince and the coastal city of Cap Haitien.

Beyond that, little was certain.

“The Haitian state is not really able to receive these deportees,” Mr. Bonheur Delva said.

The Haitian appeal for a suspension of deportations appeared likely to increase the pressure on the Biden administration, which is grappling with the highest level of border crossings in decades.

President Biden, who pledged a more humanitarian approach to immigration than his predecessor, has been taking tough measures to stop the influx, and the administration said this weekend that the Haitian deportations are consistent with that enforcement policy.