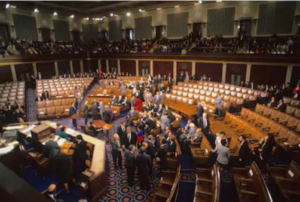 A year-end Associated Press poll showed that the two top 2019 stories were the House of Representatives’ vote to impeach President Trump and the president’s immigration agenda. The media and the president’s critics refer to Trump’s immigration views as hardline, when in fact they reflect his desire to enforce the laws as written and congressionally approved decades ago.

Incumbent Trump versus whichever pro-immigration Democrat survives the endless debate cycle sets up an interesting showdown. Another late December poll, this one taken by Rasmussen, found that Americans are becoming more aware of immigration’s effect on the qualify of life. The nation cannot add more than 1 million new immigrants year after year, as has been the long- standing practice, without societal consequences. Until the Immigration Act of 1965, immigration averaged 250,000 annually.

Included in Rasmussen’s findings: 47 percent of likely voters polled want to slow immigration-driven population growth, and 14 percent want no immigration-related growth. Further, 68 percent believe the federal government should limit legal immigration to no more than 1 million annually – a total it currently exceeds – and 36 percent want no more than 500,000 admitted each year.

With regard to population-busting family reunification, also referred to as chain migration, 59 percent of voters think legal immigrants should only be allowed to bring their spouse and minor children with them, while 32 percent favor maintaining the current practice that allows them to eventually bring in other adult relatives, including extended family and their spouse’s families.

Americans have shown a growing concern about immigration-related quality-of-life issues. Once more or less limited to border states like California, Texas and Arizona, immigration has now added population to every state, with dire effects on housing and the environment. The impacts are visible in more and more sprawl, overcrowding and traffic congestion.

Consider Virginia, for example. The state’s three fast-growing counties – Fairfax, Arlington and Prince William, all located adjacent to Washington, D.C. – reflect immigration’s consequences on population growth. Since 1990, hundreds of thousands of Hispanics and Asians have moved into the area, and today account for 32 percent of the 1.8 million aggregate residents in the counties. This is triple their 1990 level. During Northern Virginia’s local elections in 2018, some candidates, in response to constituents’ concerns, considered imposing population limits in various affected regions.