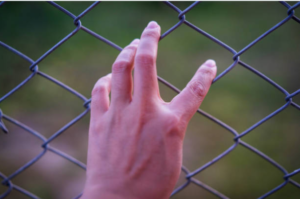 Weeks after Sen. Jeff Merkley (D-Ore.) tried to gain access to the repurposed Walmart-turned-immigration detention center, MSNBC journalists Jacob Soboroff and Tom Llamas were granted access and found boys between the ages of 10 and 17 being kept in prison-like conditions.

Soboroff was escorted into Casa Padre, an immigration detention center for young boys, by an employee who asked him to smile at the boys because they were not used to seeing outside faces. The guide said they “feel like animals locked up in cages.”

The first thing that caught Soboroff’s eye was a painted mural of President Donald Trump with a quote that read, “Sometimes losing a battle, you find a new way to win the war.” He claimed there were paintings of many presidents throughout the building but that the first one you see is Trump.

The 1,469 boys are given 40 square feet to split up to five beds, one more than what previously allocated, the journalist reported.

“They have a variance in here from the state of Texas since May because of this overcrowding crisis that has been manufactured, basically,” Soboroff clarified. “It’s a self-inflicted crisis.”

Soboroff claimed that the crisis was due to Trump’s order for immigration enforcement to strip children from their parents. During the tour, the men were informed that up to 30 percent of the current resident population was made up of children who had been separated from their parents due to the order.

The center is a certified center with licensed staff, counselors, and teachers who teach American history. However, the staff is outnumbered 8-to-1.

When asked about the staff’s level of training, Soboroff responded, “I want to be really clear, I think that there is very serious work and very serious training that goes on.”

Llamas said in a tweet that he “couldn’t imagine” living in the same conditions as the boys. He claimed that even though they were not in cages, the boys were living there with nearly “1,500 strangers.”