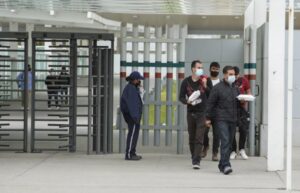 Several organizations has asked the Inter-American Commission on Human Rights to issue an emergency ruling to stop the United States from expelling asylum seekers under a Trump policy that the Biden administration has continued and defended.

The commission is part of the Organization of American States, of which the United States is a member. It has the ability to quickly issue “precautionary measures” that are somewhere between urging and ordering a country to stop causing a particular harm. It is not clear how the United States would respond to such measures in this case.

Title 42, as the expulsion policy is known, began in the early days of the COVID-19 pandemic. It authorizes border officials to send people trying to enter the United States without travel documents back to the country they crossed from or to their home countries without allowing them to access the asylum system, which screens migrants to see if they qualify as refugees.

Human Rights First, an organization involved in the filing last week, has documented more than 6,300 reports of violence — murders, rapes, kidnappings, assaults — against asylum seekers who were expelled from the United States under the policy since President Joe Biden took office.

“Title 42 is illegal and inhumane, and a more humane alternative exists,” said Nicole Phillips, legal director at Haitian Bridge Alliance, one of the groups involved in the filing. “You don’t need to believe me on that. Those are the words of Department of State official Harold Koh.”

Koh recently left the Biden administration after writing a memo condemning the policy.