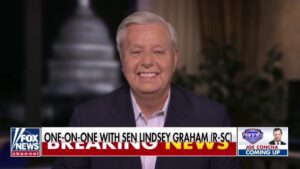 The Biden administration halting near-completed sections of the border wall is the latest example of policies that will lead to “caravan after caravan” crossing the Southern border, Sen. Lindsey Graham, R-S.C., told “Hannity” Monday.

Graham told host Sean Hannity he recently traveled to the Arizona/Mexico border “open-minded” and returned “really worried for our country.”

“All of the people remaining in Mexico waiting for their date for asylum claims are being brought back to the United States and released in the United States,” Graham said. “These combination of policies by the Biden administration will lead to caravan after caravan. By June of this year, if the Biden administration continues to dismantle the wall and change the Trump policies of asylum, we will have one million people hit the border.”

Graham added that Biden’s immigration policies make “zero sense” and were aimed at dismantling enhanced border security that was working under the Trump administration.

“This is all being changed because the left is demanding open borders. I predict this that immigration will be a bigger issue than 2022 then it was in 2016.”

Hannity then questioned the resolve of some members of the Republican Party before asking Graham if the GOP could “stand together” on immigration.