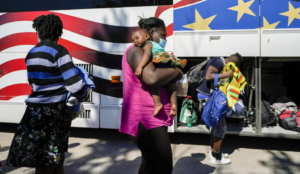 WASHINGTON — House Republicans are planning to use an oversight hearing next week to attack the Biden administration on its immigration policies, according to a memo obtained by The New York Times that offers a road map for how the GOP intends to further weaponize an issue that is already a main thrust of their midterm campaign message against Democrats.

The detailed, 60-page guidance memo includes misleading and provocative talking points that seek to portray migrants and refugees as perpetrators of gruesome crimes, especially those involving sexual assault, echoing the language that former President Donald Trump used to denigrate immigrants. It also argues that the Biden administration has been lax on illegal immigration, seeking to put Democrats on the defensive on the issue.

It comes as Democrats are growing increasingly concerned that President Joe Biden’s immigration policies, including the recent decision to lift pandemic-era border restrictions next month, could pose a political liability for them ahead of the midterm elections.

The memo — which is marked “CONFIDENTIAL — FOR INTERNAL USE ONLY” — repeatedly insinuates that immigrants could be sex offenders, highlighting a handful of arrests at the southwestern border and of Afghan evacuees. It also misrepresents a Biden administration policy designed to humanely enforce immigration laws as one that would bar law enforcement from surveilling sex offenders near schoolyards.

Alejandro Mayorkas, the secretary of Homeland Security, is set to testify Thursday for the first time in front of the House Judiciary Committee, just as the administration is bracing itself for a surge of migrants expected to make asylum claims at the border in late May. That is when a public health rule limiting border crossings because of the pandemic, known as Title 42, is scheduled to be lifted, unleashing a two-year backlog of claims on top of the high volume of migrants who typically come to the southwestern border in the spring.