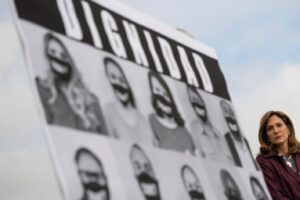 With Democratic efforts faltering, Republican lawmakers see a chance to expand upon gains the party has made with Latino voters.

Rep. María Elvira Salazar, a freshman Republican from Florida, is sick of politicians promising — and failing — to improve the U.S. immigration system and help the undocumented population.

She recalled when President Barack Obama promised to pass immigration legislation — and didn’t. President Joe Biden has pledged the same, but so far faces an uphill battle to include lasting immigration measures in Democrats’ sprawling social spending bill.

“What does that mean? That once again, we have been abandoned because of child care, elderly care, health care, whatever care you want. Once again, that Hispanics have been forgotten,” Salazar said in an interview.

The daughter of Cuban immigrants, Salazar was one of nine House Republicans who voted in March with Democrats on legislation to put so-called Dreamers and other categories of undocumented immigrants on a path to citizenship. At the time, she said her vote signaled to Democrats that she was “willing to work with them.”

As Democrats’ efforts for a path to permanent protections for undocumented immigrants falter, some political analysts see an opportunity for Republican lawmakers to step in and expand upon significant gains the party made with Latino voters in the 2020 election. With the midterm elections looming, such efforts could prove critical to growing Republican support among moderates who want to see immigration solutions — particularly in battleground states with significant Latino voting populations, such as Florida.

“Republicans sense an opportunity with Hispanic voters right now,” said GOP pollster Daron Shaw, a University of Texas at Austin professor. Republicans see those voters as being receptive to the party’s messaging on security and business opportunities, he said.

Polling has shown protections for certain categories of undocumented immigrants are popular among voters in key battleground states. It’s also an issue that has shown broad support across party lines.