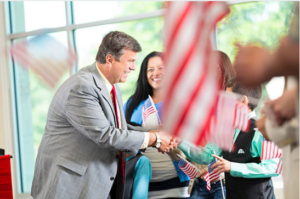 Leading Republican candidates are depicting many undocumented immigrants as criminals and endorsing a proposed wall on the Mexican border, adopting President Trump’s hard-line stance and alarming some who fear the GOP is out of step with a rapidly diversifying nation.

The party’s increasingly aggressive tone on the issue represents a shift from just two years ago, when many Republican leaders criticized then-candidate Trump’s rhetoric as racially charged and predicted he would alienate Hispanic voters.

This year, the Trump-like tenor of the campaign trail is evident in places like Georgia, where a Republican candidate for governor is telling voters he can round up undocumented immigrants and put them in his pickup truck. In Indiana, the party’s Senate nominee shows a grainy mug shot of an undocumented immigrant as he calls for the border wall and a ban on “sanctuary cities.” And in Arizona, a Hispanic Republican running for Congress has defended Trump’s description of some immigrant gang members as “animals.”

“I think his message on border security, immigration and so on has really resonated with folks throughout southern Arizona,” said Lea Marquez Peterson, president of the Tucson Hispanic Chamber of Commerce and a GOP candidate in a House district that stretches to the Mexican border, where illegal crossings remain high. She said Trump’s “animals” remark was not out of bounds.

The apparent popularity of the president’s immigration views among top-tier Republican candidates reflects the extent to which Trump has refashioned the party in his image.

Long gone is the GOP’s post-2012 autopsy, titled the “Growth and Opportunity Project,” which, following the loss to President Barack Obama, called for the party to adopt a more liberal position on immigration and work harder to court Hispanics and other minorities. Those ideas were part of the arguments in 2016 from some of Trump’s rivals, such as Jeb Bush and Sen. Marco Rubio (R-Fla.), but Trump’s triumph and continued popularity with GOP voters have made clear that strong opposition to illegal immigration is key to winning the party base.