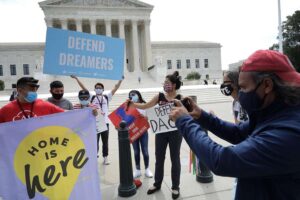 Google’s philanthropic arm plans to spend nearly $250,000 to cover application fees for immigrants brought to the U.S. illegally as children who are seeking protection from deportation under an Obama-era program.

Google.org announced Wednesday it would donate the money to the nonprofit United We Dream. The funds will benefit about 500 individuals who qualify under the Deferred Action for Childhood Arrivals program. DACA program beneficiaries are often informally called Dreamers.

The support for the program could bring renewed attention to the immigrants’ plight as a change in the White House and Congress renews hopes that hostile policies under the Trump administration could soon be reversed.

Kent Walker, a top legal executive at the Mountain View company, wrote in a blog post that the donation would allow more applicants to enter the program and gain legal protection as it faces a renewed legal threat brought by Texas and other states on constitutional grounds.

That case is before federal Judge Andrew Hanen. He previously struck down another Obama-era program designed to protect parents of Americans residing in the U.S. without permission. He indicated he believes DACA violates the law in the past, although he declined to strike it down altogether.

Any decision Hanen makes at the district court level could be appealed to a higher circuit court and potentially return to the Supreme Court, where it would face longer odds with more conservatives now on the bench.

“We believe it’s important that Dreamers have a chance to apply for protection under the program so that they can safeguard their status in the United States,” Walker wrote. “But in the middle of a global pandemic that has led to economic hardship, especially for the many immigrants playing essential roles on the front lines, there is concern that many Dreamers cannot afford to pay the application fee.”