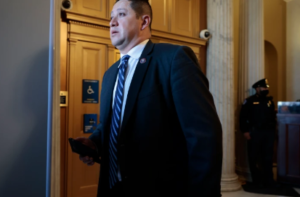 EL PASO, Texas (Border Report) – One of the harshest critics of President Joe Biden’s immigration policies was elected to a second term in Congress on Tuesday.

“Tonight’s outcome shows that Texans want a fighter who is focused on results. I am honored by the faith the people of (the district) have placed in me to serve them again. I will not let them down,” Gonzales said on social media.

Gonzales handily won a district that tends to swing from Democrat to Republican and vice versa every other election. Redistricting last year gave the former U.S. Navy cryptologist more of Northeast El Paso and left him with hundreds of miles of U.S.-Mexico border – from Socorro to Eagle Pass and Del Rio.

Political observers earlier told Border Report the freshman House member in a very short time achieved name recognition: He often appears on conservative television shows talking about immigration and posts photos of migrants being dropped off on the streets of American cities.

“The goal is not to just catch the bus; the goal is on Day 1 start governing and changing some things,” he said in an interview prior to the election. “Part of that is the appropriation process […] These local law enforcement officers, their funding has stayed the same for years; it’s time we increase this funding. The other part of it is enforcing the laws that are already on the books, forcing the administration to handle that.”

He’s also been appointed by Republican leaders to the powerful Appropriations Committee and House panels that deal with international relations, trade and security. Gonzales also outraised and outspent Lira, a retired Marine, by a substantial margin

Gonzales outraised and outspent Lira, a retired Marine, by a substantial margin.