Home Resources For Donald Trump, Immigration is All About Race 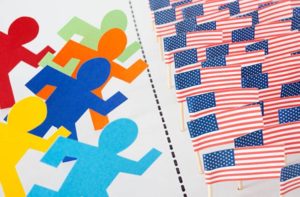 Long before Donald Trump referred to African nations as “shithole countries” last week, he was well known to use bigoted language about immigrants who come from places he’d prefer they didn’t.

During his election campaign, he made sweeping generalizations about Mexicans being rapists and bringers of crime, and tarred all Muslims as potential Islamic terrorists.

As President, he reportedly said Haitian immigrants “all have AIDS” and that those from Nigeria would “never go back to their huts” (the White House denies he used those words). He also retweeted the posts of a racist anti-Muslim group in Britain, referred to white nationalists as “fine people,” and had to be pressured into condeming the murderous violence those fine people committed in Charlottesville, VA.

As a New York landlord in the 1970s, he refused to rent to black people and had to be forced into it by the Justice Department. Perhaps most famously, before entering politics he repeatedly accused former president Barack Obama of being born in Kenya, a racist trope that was utterly false.

Mr. Trump clearly views non-white people through a bigotted lens. His statement last week that he would prefer it if the U.S. brought in more immigrants from places like Norway, combined with the “shithole” comment, are just two more nails in the coffin of his irrelevant claim that he is the “least racist person that you’ll ever meet.”

His recent comments raise another issue, though: Does Mr. Trump even know how immigration works?

He has repeatedly said he wants America’s immigration system to put less emphasis on family reunification and low-skilled temporary workers, and to end the lottery system that provides about 50,000 visas per year for people in countries that are underrepresented in the U.S. immigrant population. Instead, he wants to focus on “merit.”

By THE GLOBE AND MAIL
Read Full Article HERE