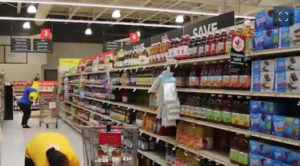 PENNSYLVANIA (WHTM) — According to a release from the Department of Justice, the Giant Company was ordered to pay a civil penalty to the United States after discriminating against a non-U.S. citizen worker when she was applying for a job with the company.

The Department of Justice stated that Monday, Oct. 31, they reached a settlement agreement with the Giant Company, which is a Pennsylvania-based grocery store chain that has locations in multiple states. The settlement that was agreed upon resolves immigration-related discrimination claims. These claims stated that Giant discriminated against a non-U.S. citizen worker when checking their permission to work in the U.S., which is a violation of the Immigration and Nationality Act (INA).

Multiple Dunkin’ locations in Midstate violated child labor laws; Department of Labor
“Employers cannot discriminate against employees because of their citizenship, immigration status or national origin when verifying their permission to work,” said Assistant Attorney General Kristen Clarke of the Justice Department’s Civil Rights Division. “The Justice Department will continue to ensure that workers do not face unlawful discrimination when proving their permission to work in the United States.”

According to the Department of Justice, a non-U.S. citizen was trying to get permission to work at Giant, which refused to accept valid documentation that proved her permission to work. The company demanded different documentation from her. The department’s investigation showed that Giant routinely required specific documents from non-U.S. citizens that were newly hired. Giant required lawful permanent residents to show their permanent resident cards (commonly known as a “green cards”) even if the new hire had other valid documentation.

The Department of Justice stated that Giant did not let the new hire work, even though she had valid documentation, because she wouldn’t present her green card. Giant, however, allows U.S. citizens to choose from among multiple acceptable document types.