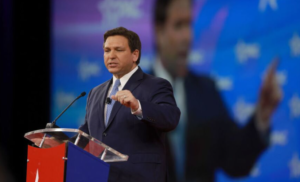 The number of migrant children crossing the southern border without their parents reached a record high last year — and the backlash is still growing.

Republicans accuse the Biden administration of organizing secret flights, carrying migrants from the border to communities across the country, that critics have branded “ghost flights.”

But that rhetoric is often at odds with the facts.

“It’s not secret, and it’s not new,” said Jennifer Nagda, policy director with the Young Center for Immigrant Children’s Rights, a non-profit that works closely with unaccompanied children.

When children and teenagers from Central America cross the border alone, the federal government is required by law to care for them until they’re reunited with a sponsor, often a parent or relative, or placed in a network of special shelters around the U.S.

To do that, federal officials sometimes fly those children on charter planes from the border to other parts of the country. For years, this was widely seen as normal, even routine.

With border arrests at the highest levels on record, Republicans see immigration as a potent line of attack in midterm elections this fall. And some are seeking to weaponize basic operations of the immigration system that had rarely attracted attention before — including flights carrying unaccompanied children around the country.

GOP lawmakers across the country have sounded the alarm about “ghost flights” filled with migrant children — claims that have been amplified by Fox News and other right-wing outlets.

“There’s no warning,” said Florida Governor Ron DeSantis at a press conference last week. “It’s just in the middle of the night. And then you’ll wake up and someone will say, ‘they brought a bunch of unaccompanied minors.'”

But federal officials insist that these flights happened exactly the same way during previous administrations, including under former President Trump.