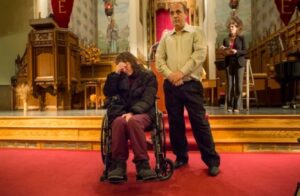 At a rally and court hearing this week, supporters of an Albanian immigrant with an ailing wife who is avoiding deportation by living in sanctuary at a Detroit church are renewing their calls for him to stay in the U.S.

At a federal appeals court hearing Wednesday in Ohio, an attorney for Ded Rranxburgaj, 50, argued that he should not be deported, noting that he has been open with authorities about his status.

But some of the judges with the United States Court of Appeals for the 6th Circuit who heard the case pushed back against her arguments, suggesting that Rranxburgaj is a fugitive.

“Can you explain to me why he’s not a fugitive?” asked U.S. Circuit Judge Amul Thapar during the hearing, which was audio streamed online. “Isn’t your client flagrantly ignoring authorities, not appearing for a hearing, not agreeing to appear? That would be no different than in a criminal case, a fugitive abroad where we know where the person is, and can’t get them back to the country.”

Nora Ahmed, the attorney representing Rranxburgaj, said that he has not been hiding where he is and has been transparent with authorities.

ICE declared Rranxburgaj a fugitive in January 2018 after he sought refuge in Central United Methodist Church in Detroit, where he has lived now for more than two years along with his wife, Flora Rranxburgaj, who has multiple sclerosis.

Born in Albania, Rranxburgaj traveled from Albania to Canada and then came to the U.S. 18 years ago as a visitor, along with his wife. He overstayed his visa and become undocumented, but was allowed to stay in the U.S. for years. A cook at a Coney Island restaurant in metro Detroit, he said he had to stay in the U.S. to help his ill wife, who is unable to take care of herself.