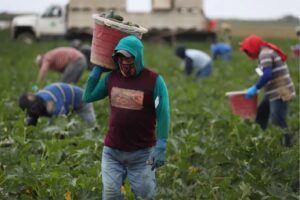 With Thanksgiving less than a week away, inflation continues to make headlines for driving up food prices, both at grocery stores and in restaurants.

A major factor behind those increases is the cost of labor, where companies’ struggles to find and retain staff are having ripple effects from farm to table.

Supply chain problems are intrinsically tied to labor issues, and the US food supply chain is facing a particular labor shortage that has deepened over the past five years: foreign-born workers.

Had US immigration levels maintained their pre-2016 trajectory, the US would have roughly 2 million more people today, analysts at both JPMorgan and Grant Thornton estimate.

Trump Administration policies cut legal immigration in half during his term, according to an estimate by the National Foundation for American Policy, and when the COVID-19 pandemic hit, the administration further tightened rules with more than 40 policy changes for documented and undocumented immigrants alike.

While neither Trump nor his policies are solely responsible for all of the shortfall, the rhetoric and political climate of those years certainly contributed to the shortfall employers currently face.

Given the 75% labor force participation rate of foreign-born residents, that works out to 1.5 million fewer workers available to fill the 10 million open jobs in the economy right now.

A lot of those open jobs are in food-related industries like agriculture, processing, and service – industries that have a history of relying on low-wage immigrant labor, including undocumented workers.

Now that strategy has led to a precarious position.

Restaurants, like farming and processing jobs, tend to offer low pay and poor conditions in many cases, and high turnover means there are almost always jobs available.

These same industries were hit hard by COVID-19 in the early days of the pandemic. Many undocumented workers, particularly at restaurants that shut down, lost their jobs, while those who continued working were in frontline positions where they were more likely to be infected, such as in meat-processing plants with documented large outbreaks.