Home Resources From Despair To Joy: Afghan Interpreter Escapes To U.S. With Help Of Louisiana Buddy 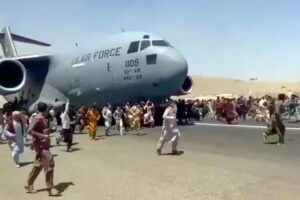 He waited 15 hours at Kabul International Airport, among thousands of people, hoping to escape Afghanistan with his life.

Jostling for his place among a crowd of strangers, the Afghan, at least, had someone on his side: An ex-U.S. military contractor in Louisiana who stayed on the phone through the night with his tired, desperate friend and former interpreter.

Finally, the Afghan made it through Abbey Gate, a main entryway into the airport, and onto a plane.

“It was like you were in a hell, and then you’re going to paradise,” the former interpreter said in a recent phone interview.

He was stunned to learn later of the suicide bombing that killed 13 U.S. troops and at least 60 Afghans near the same airport gate just six hours after his plane left.

For safety reasons and to follow the policies of Catholic Charities of Baton Rouge, which helped resettle the Afghan in Louisiana, pseudonyms will be used to name the two men in this story: Adam for the refugee and Sam for the friend who helped rescue him.

A path to safety

Sam worked in Afghanistan for four years with a contractor hired by the U.S. State Department. Adam was the interpreter who bridged the language barrier for Sam and others.

The two men stayed in touch regularly since Sam returned to the states several years ago, sharing news about their families and how they were getting on.

Then, Sam said, in August came a different kind of communication. “He calls me and says the Taliban were marching to Kabul,” Sam said.

Adam was in danger.

After learning English at an early age from an American neighbor in Afghanistan and then continuing his studies at a private English-language school, Adam became an interpreter for the military contractor.

By Ellyn Couvillion for THE ADVOCATE
Read Full Article HERE