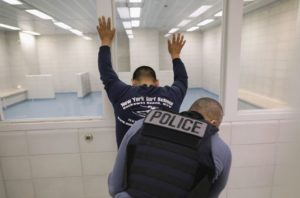 For years, immigrant New Yorkers have stood side by side to demand respect and dignity and win critical victories for our communities, including getting ICE out of Rikers Island and getting the nation’s largest municipal identification card program for all residents.

Now, we are taking another critical step forward, working together to create a historic new bond fund known as the New York Immigrant Freedom Fund.

ICE enforcement across the country has exploded, both in the number of raids and the increase in the use of force and aggression by ICE. From President Trump’s Jan. 20th inauguration through the end of the fiscal year, ICE carried out 42% more arrests (110,568 in total) than during the same time period in 2016. In New York, the Immigrant Defense Project documented a 1700% increase in ICE arrests and attempted arrests at courthouses throughout the state from 2016 to 2018.

As more and more people are detained by ICE, those who are eligible for bond wait weeks or months before they have the opportunity to be heard in court. While they wait, they experience increasing trauma, which takes an enormous toll on their emotional and physical well-being. When they do get an opportunity to see a judge, the bonds are often so high that they have no choice but to remain in detention. Desperate to avoid this fate, many low-income families (often where the person detained is the primary breadwinner) have no choice but to fall into debt or into the hands of predatory bond services.

In early 2018, local organizations including Make the Road New York, Black Alliance for Just Immigration, Families for Freedom, Immigrant Defense Project, African Communities Together and Surveillance Technology Oversight Project came together to brainstorm how to fight back against prolonged detention. Having worked with countless detained immigrants and their families, we understood that access to bond, with no strings attached, was a priority for which we could no longer wait. The coalition quickly decided to set up a bond within the Brooklyn Community Bail Fund, which had already been working to end cash bail for those with cases in New York’s criminal courts.