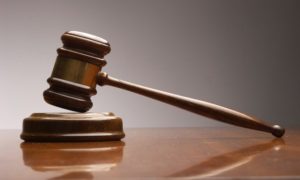 FOUR Haitians were charged separately with breach of the Immigration Act in the Freeport Magistrate’s Court – three for illegal landing and one for illegal entry.

#Polina Fradin, 44, appeared in Court One before Deputy Chief Magistrate Debbye Ferguson on the charge of illegal landing. She pleaded guilty and was fined $300.

#The particulars are that Fradin had landed from a place outside The Bahamas without leave of the Immigration officer. She was ordered to pay $300 fine or serve one year in prison.

#Fradin paid the fine and was turned over to Immigration officers for deportation to Haiti.

#Mariana Pierre Frontaine, 23, appeared in Court Two before Magistrate Charlton Smith, charged with illegal entry.
#According to the particulars, Frontaine was found in Eight Mile Rock having landed from outside the Bahamas. She pleaded guilty and was ordered to pay $300 fine, or serve two years imprisonment.

#She paid the fine and was flown to Nassau where she will be detained at the Detention Center to await repatriation.

#Fenick Pierre, 44, and Andre Alfred, 30 were both charged with illegal landing. The men were taken into custody by Immigration officers on Friday.

Pierre and Alfred had entered the country illegally by boat from Haiti in January and September 2017, respectively, and remained in the country without legal status.

#They both pleaded guilty and ordered to pay $300 each or serve two months imprisonment. They paid the fine and were flown to New Providence where they will await deportation.

#• A 38-year-old man of Haitian descent was charged with harbouring an illegal immigrant.

#Nicanson Guerrier appeared in Court Two before Magistrate Charlton Smith where he was charged with harbouring an illegal immigrant contrary to Section 47A(1)(a) and Punishable under Section 47A(2) of the Immigration Act Chapter 191, Statute Law of The Bahamas.

#Guerrier, who was born in the Bahamas to Haitian parents, pleaded guilty to the offence.

#According to the particulars, on March 8, at Eight Mile Rock with deliberate intent to evade apprehension by the Department of Immigration did knowingly harbour Mariana Pierre Frontaine at his residence.