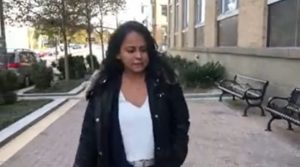 BALTIMORE (Reuters) – When Maricruz Abarca learned three years ago that she had been given the legal right under a U.S. government program called Deferred Action for Childhood Arrivals to work in the United States and avoid deportation, she started to cry.

After years of living illegally in the shadows after moving to the United States from Mexico at age 15 to join relatives in New Jersey, she finally could make concrete plans for the future.

“Having the opportunity to be legal and without fear of deportation, it was just a big plus – and going to sleep every night without thinking about what was going to happen with my kids,” Abarca, 31, said in an interview on the campus of the University of Baltimore, where she is studying with aspirations of becoming a lawyer.

Abarca is one of roughly 660,000 people, dubbed “Dreamers,” covered by DACA, which was created to protect immigrants who entered the United States illegally or overstayed a visa as children. DACA was implemented in 2012 by Democratic President Barack Obama. Republican President Donald Trump in 2017 moved to rescind the program, though he was blocked by various court rulings.

For Abarca, DACA has provided concrete benefits. It helped her become eligible for lower in-state college tuition and obtain a license as a used-car dealer. It also provided security for her family, including her three children – all American citizens by virtue of being born in the United States. Abarca dreams of one day becoming mayor of Baltimore.

But Abarca’s status – along with all the others protected by DACA – is under threat. The U.S. Supreme Court, whose 5-4 conservative majority includes two justices appointed by Trump, is scheduled to hear arguments on Tuesday to decide the legality of Trump’s plan to rescind the program and expose the DACA recipients once again to the threat of deportation.