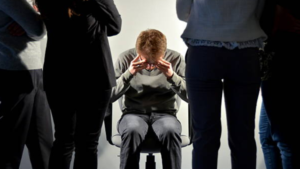 The Federation for American Immigration Reform, better known as FAIR, has long been one of the most influential organizations advocating for a crackdown on illegal immigration and strict limits on the legal variety.

One of its public faces was Joe Gomez, a Mexican American and African American who served as its press secretary from November to July.

”We need to protect Americans,” he’d often say in interviews.

But after seven months of contending with what he described as racist slurs, discrimination and harassment from the group’s management, Gomez has filed a discrimination complaint with the Office of Human Rights in Washington, a local governmental agency that enforce human rights and anti-discrimination laws in the district.

Gomez, a 32-year-old independent and former NBC News Radio journalist who voted for President Trump, said that when he applied for the job the organization’s leaders assured him they simply believed in the rule of law and were not racist.

“The way they sold themselves was ‘we’re against anyone who comes to the country illegally…. We do not discriminate against blacks, whites, Latinos,’” Gomez said he was told. “What I found was something utterly different.”

In the complaint, which he filed late last month, he alleged discrimination based on both his race and severe anxiety that he developed on the job.

He said he was denied a bonus promised to him after a “glowing” six-month review. He also said that one colleague repeatedly used a derogatory term to refer to Latinos and that he was ridiculed for not being able to speak Spanish despite his heritage.

On one occasion, he alleged, another employee “offered to pretend to be an ‘illegal alien’ from Mexico and smear herself with mud” for a film in which Gomez would play the lead role. Gomez declined to participate.

Gomez said he’s asking for monetary compensation but wouldn’t say how much. He pledged to donate most of any financial settlement he receives to immigrant charities.