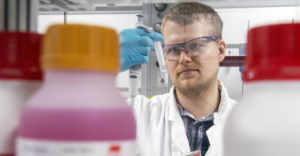 WASHINGTON ― A group of former national security officials is asking lawmakers to exempt immigrants with advanced science, technology, engineering and math degrees from green card caps in order to help the U.S. compete with China.

“In today’s technology competition, the most powerful and enduring asymmetric advantage America has is its ability to attract and retain the world’s best and brightest,” the officials said in a letter dated Monday, first reported by Axios. “Bottlenecks in the U.S. immigration system risk squandering this advantage.”

Signatories asked that a House-passed provision, or some version of it, contains the exemption from green card caps.

The plurality of NDIA member firms reported in 2021 that America’s talent gap is the single-most vulnerable part of their supply chain, though NDIA also recorded an uptick in the size of the industry’s technical talent pool since 2018.

Meanwhile, China is “racing ahead” in growing its pipelines for domestic talent and is on track to double the number of U.S. STEM doctorates within the next three years, the letter said.

Half of the advanced STEM degree holders working in the defense-industrial base are foreign-born, according to a March report from The Institute for Progress.