Home Politics For Immigrants, Election Promises Relief From An ‘Atmosphere Of Terror’ 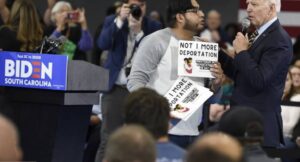 For years, immigrants in the Atlanta suburbs lived in fear that a routine traffic stop would lead to deportation. Thousands of immigrants in the country illegally have been deported for minor offenses, advocates say, because of close ties between county jails and immigration authorities.

But now, there are some new sheriffs in town.

The 2020 election is expected to usher in a major shift in immigration enforcement. On the federal level, the Biden administration plans to rein in Immigration and Customs Enforcement, starting with a temporary moratorium on deportations.

On the local level, a number of sheriffs known for their hardline immigration stances retired or lost their reelection bids. In Georgia, the blue wave that delivered the state to Biden also helped to elect several county sheriffs who have pledged to limit how they cooperate with ICE.

Taylor is a Democrat and the first Black man ever elected to the job. He ran on a promise to get rid of a longstanding cooperation agreement with ICE signed by his Republican predecessor. He says he’ll follow through on that promise the first day he takes office in January.

Taylor says there’s no evidence that the agreement was helping public safety. And, he says, it was hurting trust in law enforcement in his county, where more than one in four residents was born outside the U.S.

“It definitely undermined the confidence and trust and transparency between law enforcement and the community,” said Taylor.

In neighboring Cobb County, Democrat Craig Owens ousted the longtime Republican sheriff. Owens has pledged to end his county’s agreement with ICE, too.

“There’s nothing that we can find anywhere to say the program took a large scale of violent criminals off the road,” Owens said.