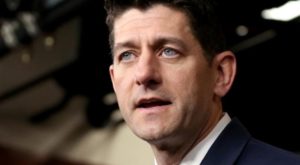 The meeting comes as GOP leaders in the House face pressure from rank-and-file members to bring immigration legislation to the floor.

Eighteen Republicans have signed on to a discharge petition to force a series of votes on several immigration bills. If the petition wins a majority of House members as signatories, it would force a vote on the floor.

If all Democrats back the petition, the sponsors would only need 25 Republicans to do so, a number that appears to be within their grasp despite opposition from GOP leaders, who say the petition gives power to the minority.

GOP leaders have informally whipped members against backing the discharge petition, which could lead to passage of legislation fixing the Deferred Action for Childhood Arrivals program that might allow young people brought to the United States illegally as children to remain here to work and go to school.

“Well, we’re still talking after we talked to the president on which way to go,” McCarthy told The Hill. “I still have a firm belief discharge is the worst way to legislate.”

House Majority Whip Steve Scalise (R-La.) is continuing discussions with members on “an acceptable path forward on immigration,” which does not include a discharge petition, according to sources close to the talks.

McCarthy said there was an emphasis on a need for stronger border protections during the discussion at the White House.

Trump has repeatedly pressured Congress to take actions to toughen the nation’s immigration laws and to build a wall on the Mexican border.

By Juliegrace Brufke for THE HIL
Read FUll Article HERE