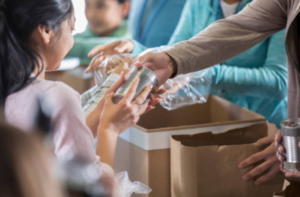 Families of immigrants have been reluctant to go to food banks and sign up for food stamps this year, anti-hunger advocates said, because many are afraid the federal government will use those requests for assistance against them in immigration proceedings.

The result is that many families, including children and pregnant women, could be at risk for malnutrition, according to food bank officials and anti-hunger groups.

Officials are pointing to a new “public charge” rule under President Donald Trump, that would change what factors immigration officials consider when deciding if applicants qualify for a visa or permanent resident status. The rule says that applicants seeking to live in the U.S. from other countries or immigrants seeking to stay permanently should be denied if they will rely too heavily on government services, such as government housing, subsidized health care or food stamps, known as the Supplemental Nutrition Assistance Program or SNAP.

The current guidance says this rule applies mostly to people who receive cash assistance from the government. But the Trump administration proposed the change that would allow officials to consider more programs.

“It’s not like things were hunky-dory for immigrants before then, and now it’s just gotten so much worse,” said Joel Berg, head of Hunger Free NYC, of the administration’s new “public charge” rule. “So you take people that are already scared and are coming from countries and are scared of their government — for good reason — and throw this on top of that, and it’s truly a massive calamity.”

The vast majority of people who use food stamps are U.S.-born citizens, mainly children and elderly adults. About 9 million people are legal immigrants or children who are American citizens, but their parents were born outside the country.

The Homeland Security Department, which oversees immigration, estimated in a proposal that 2.5 percent of immigrants in the U.S. — more than 500,000 people — would disenroll from public programs because of the change.