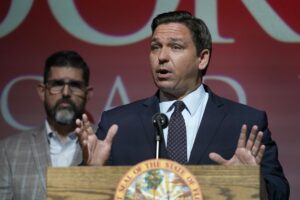 DeSantis’ order authorized the Florida Department of Law Enforcement and the Florida Highway Patrol “to detain any aircraft, bus, or other vehicle within the State of Florida reasonably believed to be transporting illegal aliens to Florida from the Southwest Border” — if allowed by federal and state law. The caveat that the law must be followed likely prevents them from seizing federal aircraft.

He also ordered the agencies to gather information on the identities of any immigrants arriving illegally in Florida from the Mexico border and told state agencies not to spend money assisting those immigrants unless required by law.

Democratic state Rep. Anna Eskamani criticized DeSantis, saying he’s using the immigration issue to score political points with his conservative base instead of focusing on other issues facing the state.

“He is completely bonkers and just wants to distract everyday people from real life issues,” she said. “We have an affordable housing crisis, we have climate change to worry about, we have folks that can’t find a good paying job. There’s so many issues around us and this is what he chooses.”

Attorney General Ashley Moody’s lawsuit claims the federal immigration policy will cost the state millions of dollars and cause harm to Florida.

“While some arriving migrants have legitimate asylum claims, many do not. Some are gang members and drug traffickers exploiting the crisis at the border, as evidenced by the skyrocketing amount of Fentanyl seized at the border this year,” the suit says.

Moody and DeSantis held a news conference in southwest Florida in which both strongly condemned Biden on immigration and praised former President Donald Trump’s policies.