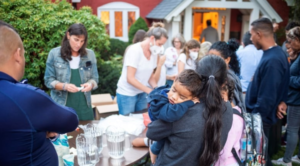 A group of immigrants landed on the wealthy Massachusetts island of Martha’s Vineyard on Wednesday, part of a campaign by Republican governors to shift the immigration burden to Democratic areas.

Florida Gov. Ron DeSantis took credit for the arrival of two planes of immigrants, one spokesperson told Fox News and a second said on Twitter.

The website showed video of people getting off a plane and boarding a van. It said the video depicted the immigrants who had been sent from Florida.

The Florida legislature appropriated $12 million US to transport the migrants from the state consistent with federal law, Fenske said.

Border states Texas and Arizona since the spring have sent thousands of immigrants to cities such as New York, Chicago and Washington. While officials and activists in those cities have mobilized to help the migrants seek shelter, care and education for their children, Washington, D.C., Mayor Muriel Bowser declared a public emergency over the development, which allows the city to establish a new office of migrant services.

Martha’s Vineyard is distinct from those cities in that it is a summer vacation destination and farm area with a year-round population of only 20,000. Business activity and job opportunities are greatly reduced in the winter months, and it has a higher cost of living than many cities.

Massachusetts Gov. Charlie Baker, a Republican, said he was in touch with local officials and that short-term shelter was being provided.

Massachusetts state representative Dylan Fernandes said on Twitter that immigrants had arrived without warning from Texas.

“Many don’t know where they are. They say they were told they would be given housing and jobs. Islanders were given no notice but are coming together as a community to support them,” Fernandes, a Democrat who represents Martha’s Vineyard, said on Twitter.