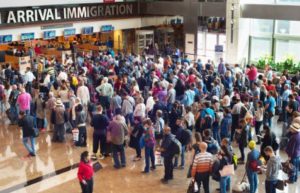 Population growth in the United States is almost entirely driven by the federal government’s immigration policy. The Census Bureau predicts that the nation’s population will grow from 325.5 million today to 403.7 million by 2060 — and 96 percent of that increase of 78 million people is due to the current historically high level of immigration. As both Americans and as global citizens, we have an obligation to consider how such rapid growth might impact the planet around us.

As outlined in the National Environmental Policy Act (NEPA) and the Endangered Species Act (ESA), federal agencies are supposed to weigh the environmental impact of any new policies they introduce. Strangely enough, federal agencies have almost completely ignored these laws when it comes to immigration, even though immigration-driven population growth has a huge impact on the environment.

But how exactly does population growth affect America’s natural resources and Americans’ ways of life? Doesn’t America, with its vast swaths of land in the middle of the country, have enough room to accommodate far more people than it currently does? In two now-deleted tweets that went viral last week, New Yorker journalist Osita Nwanevu mocked Americans who are concerned about immigration as “Elmer Whoever[s]” given that middle America is full of “vast and mostly empty country where 40 percent of the land is for cows”:

While it is true that much of America’s physical land is not currently used for residential purposes, but rather for agriculture, Nwanevu’s logic ignores a whole plethora of problems related to large-scale population growth (not to mention the necessity of agriculture). Here are five of the biggest impacts that immigration-driven population growth is already having on our environment and our living conditions:

1. Loss of Biodiversity and Species Extinction. Overpopulation directly threatens a wide range of endangered animal species in the United States, as human consumption of resources crowds out and poisons other animals. The Center for Biological Diversity listed the top-10 U.S. species being driven to extinction by overpopulation. This includes the Florida panther, whose habitat has been destroyed by urban sprawl from the city centers in Florida; the San Joaquin kit fox, which has lost almost all of its habitat as grasslands were converted into farms; and the Loggerhead sea turtle, whose nesting areas have been converted into recreational beaches.

Overall, there are over 1,300 endangered or threatened species in the United States today and as a growing population demands more and more resources — from farmland to residential real estate to urban sprawl — these species will have fewer places to live.