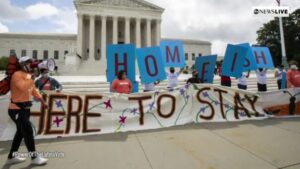 The U.S. government says it has approved the first new applicants in several years to the Obama-era Deferred Action for Childhood Arrivals program for immigrants brought to the U.S. as young people

NEW YORK — Over 170 new applicants have become the first individuals in several years to win approval to the Obama-era Deferred Action for Childhood Arrivals program for immigrants brought to the U.S. as young people, the U.S. government revealed in a court filing Monday.

U.S. District Judge Nicholas Garaufis had ordered the federal government to post public notice that it would accept applications under terms in place before President Donald Trump ended DACA in 2017, saying it was unconstitutional.

The U.S. Supreme Court ruled in June that Trump violated federal law in how he ended the program, but Chad Wolf, the acting Homeland Security secretary, said the administration wouldn’t accept new applications and would grant renewals for one year instead two. DACA shields about 650,000 people from deportation and makes them eligible for work permits.

The federal government did not appeal a November Garaufis order in which he said Wolf was in his position illegally. He ordered two-year renewals reinstated and required Homeland Security to report how many new applicants were rejected from June to Dec. 4. The figure: 4,383.

Besides processing the new applications, the U.S. Citizenship and Immigration Services arm of Homeland Security also said it approved 61,844 renewals while denying 326 and rejecting 2,842 renewals in the last six weeks of the year.

Messages seeking comment were sent to advocates for DACA applicants and lawyers who represented them.