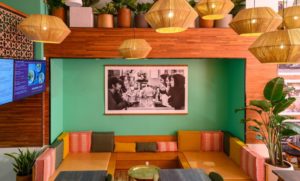 The group calls Immigrant Food, located in the shadow of the White House (no, this isn’t some New York Times-esque joke—the restaurant is actually one block away from presidential headquarters) a “cause-casual” restaurant. They envision their lunch spot as a place for advocacy and community partnerships with immigration NGOs as well as dishes that crisscross cultures. Schechter, a former long-time board member for José Andrés’ ThinkFoodGroup who speaks six languages, has a background in advocacy and political consulting. Immigrant Food provides a venue to marry his dual passions and to honor his Jewish parents, who immigrated to the U.S. from Austria and Germany.

“For a long time, the life I had with politics and advocacy and the one I had with restaurants were very separate things,” Schechter says. “At this moment, in which immigration is such a controversial and divisive issue in our country, I keep thinking of my parents. They walked off the boat with nothing. We believe celebrating immigration is something that is profoundly American.”

For the Venezuelan-born Limardo and Vázquez-Ger, the project comes on the heels of their smash hit Seven Reasons on 14th Street, recently named the best new restaurant in the country by Esquire. To “combine 20 restaurants in one” for Immigrant Food, Limardo says, was no easy task. He took a fast-casual fusion approach with nine pre-made bowl recipes ($12-$13.75), but think a bit more gourmet than Chipotle or Cava. Limardo researched spices and flavor profiles of more than a dozen countries represented by U.S. immigrants, then tested hundreds of recipes to cross-pollinate sweet, sour, and spicy ingredients. Each dish combines multiple cultures, including the Columbia Road bowl with spice-rubbed steak and pickled loroco flower buds to represent D.C.’s biggest immigrant populations.