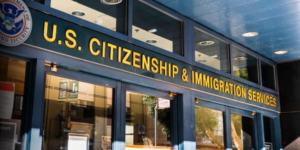 The federal government on Tuesday extended temporary work authorization for a broad array of immigrants who are awaiting their final immigration papers.

The new extension is an expansion of a 180-day extension USCIS had announced in November.

The extensions reflect an administration that has sought to make it easier for immigrants to keep their work permits, but hasn’t been able to fully implement reforms at USCIS to more quickly process paperwork.

In March, USCIS announced a program to reduce backlogs, including by expanding premium processing for certain applications — the possibility for applicants to pay a higher fee to get their paperwork processed in a matter of weeks.

Many of the changes are reinstating processes that existed before the Trump administration’s aggressive slowdown of USCIS processing, and before the pandemic further decimated the agency’s capabilities.

Still, the agency has been historically underfunded — the bulk of the agency’s budget comes from application fees, which have remained stagnant at around $5 billion per year since 2019.

The 540-day extension means those existing applicants won’t pay fees for a new Employment Authorization Document (EAD) for that time period, while the automatic renewals should free up USCIS resources for backlogs in other areas.

In March, USCIS reportedly had an EAD backlog of around 740,000 applications.

While EAD extensions give workers and employers a sense of security, immigrants with expired-but-statutorily-extended EAD cards can still have trouble verifying their right to work for new employers, or getting basic services like renewing drivers licenses.

Employment authorization is also separate from travel permits, meaning hundreds of thousands of foreign nationals are not allowed to travel internationally until their applications are formally processed.