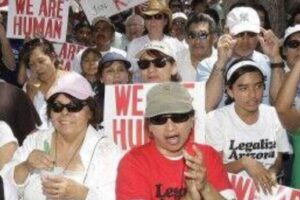 Federal courts are now wrestling with the underpinnings of an immigration law provision and whether or not it is racist.

A federal judge in Nevada ruled that Section 1326, a law making it a felony to reenter the United States after being deported, is unconstitutional.

The Department of Justice has appealed the case, now sending it to the 9th U.S. Circuit Court of Appeals.

Judge Miranda Du, an Obama appointee, issued the original order in August saying the law was passed with racist antecedents and discriminatory intent against Latinos, violating the Equal Protection Clause.

“The law has a disparate impact on Latinx persons, and the government fails to show that [the statute] would have been enacted absent racial animus,” Du wrote.

The Justice Department, in its appeal briefs, wrote that Du disregarded “the obvious alternative explanation that [the number of Latinos] are attributable to geography and the high percentage of such individuals among the population of noncitizens unlawfully in the United States.”

“Assuming that the 9th Circuit accepts the equal protection argument, the case would face long odds in the Supreme Court,” Freeman Halle, with the Law Journal for Social Justice, wrote. “While Judge Du’s opinion is inviting some much-needed introspection on the topic of U.S. immigration policy, lasting relief for [Section 1326] defendants will likely require legislative action.”

Unlawful entry and reentry into the U.S. are some of the most frequently prosecuted crimes in federal courts.

“If we are trying to uproot systemic racism, that means we have to consciously understand what motivated a law’s original enactment, and then make the conscious decision whether we want to change it or whether we want to continue it,” Ahilan Arulanantham, co-director of the Immigration Law and Policy Center at UCLA School of Law, told the Washington Times.