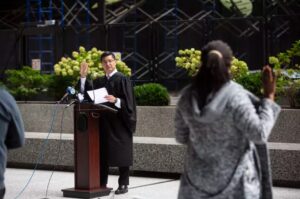 A federal judge in California ruled in favor of immigration groups, including the Illinois Coalition for Immigrant and Refugee Rights, who challenged a new rule that would have increased by 81% the cost to apply to become a U.S. citizen.

U.S. District Judge Jeffrey White granted a motion Tuesday that will stop U.S. Citizenship and Immigration Services from imposing the fee changes that were expected to go into effect Friday. Though the ruling was made in California, the decision calls for the fees to be blocked across the country because of the various local and state governments that argued against the fee changes.

USCIS did not immediately respond to a request for comment.

In the past couple of weeks, immigrants in the Chicago area have rushed to submit immigration applications before the government imposed the changes. The fee to apply for citizenship would have increased from $640 to $1,160.

Fred Tsao, of the Illinois Coalition for Immigrant and Refugee Rights, said Tuesday’s decision shows that the changes were poorly explained and “severely flawed.”

“This is a victory for all immigrants who aspire to citizenship but who would have been priced out under this fee schedule,” Tsao said in an email.

Last week, a virtual hearing was held to discuss the injunction. Samina Bharmal, an attorney representing the immigration groups, argued that Chad Wolf, the acting U.S. Secretary of Homeland Security, does not have the authority to implement the changes because of legal questions surrounding whether he was properly appointed to the post.

But the government defended Wolf’s appointment and argued the immigration groups were merely speculating about how much the changes would affect the groups’ finances.

The government won’t be able to implement the fees pending the outcome of the lawsuit brought by the immigration groups, but the agency could appeal Tuesday’s decision.