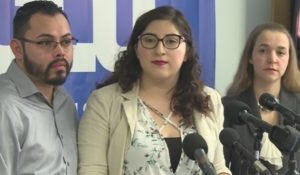 The American Civil Liberties Union (ACLU) of Massachusetts is suing the government in hopes of preventing married couples and families from being separated as one spouse pursues lawful citizenship.

The lawsuit was filed on behalf of five immigrants who are married to U.S. citizens and actively seeking green cards.

The face of the lawsuit is a mother from Providence who was detained by Immigration and Customs Enforcement (ICE) officials earlier this year.

Lilian Calderon was brought to the United States from Guatemala when she was 3 years old. She grew up in Providence and married her high school sweetheart, with whom she has two young children.

Calderon and her husband were in John Joseph Moakley United States Courthouse in Boston Thursday as the ACLU sought a class certification, which would determine who is covered in the lawsuit. This was the first step in the lawsuit.

The ACLU argues it should be a class action lawsuit, which would cover every relevant case in New England, while the government says each immigration case should be heard individually. Judge Mark Wolf heard from both sides and reviewed preceding cases with similar arguments.

The judge did not make a decision Thursday, according to the ACLU, and is expected to consider the matter again next week.

The lawsuit claims U.S. Citizenship and Immigration Services (USCIS) coordinated with ICE to target individuals for detainment and deportation and facilitate their arrests.

Calderon was the subject of one such arrest back in January. She and her husband were meeting with USCIS officials to prove their marriage was legal when she was picked up by ICE agents without warning.