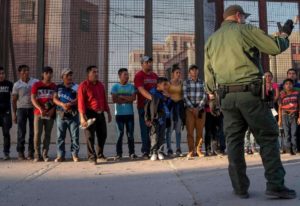 A Trump administration lawyer asked a federal appeals court in San Francisco on Thursday to allow enforcement of a ban on U.S. entry for hundreds of thousands of legal immigrants who lack private health insurance. But two of the three judges expressed doubt that President Trump was acting within his legal authority.

The same panel of the Ninth U.S. Circuit Court of Appeals seemed undecided, however, in a second immigration case involving about 26,000 Central Americans who tried to enter the United States at legal ports of entry before new rules took effect in July denying asylum to virtually all Central Americans. They were turned back by immigration officers and forced to wait in Mexico, then were ruled ineligible under the new policy.

Both cases are part of a broader dispute over Trump’s clampdown on immigration, particularly from Latin America.

The health insurance case is related to the administration’s attempt to deny legal status and work permits to migrants who receive public benefits, like food stamps and Medicaid, a rule that has been blocked by several appeals courts. The asylum ban, which applies to anyone who passes through another country without seeking refuge before reaching the Mexico-U.S. border, is pending before the Ninth Circuit but has been allowed to take effect by the Supreme Court while challenges proceed in lower courts.

Trump issued a proclamation in October to deny a U.S. visa to anyone who did not have private health insurance or show that they would obtain it within 30 days. Those seeking coverage under Medicaid or the government-subsidized Affordable Care Act would not be eligible. Immigrant advocates say it would bar entry to nearly two-thirds of all legal migrants.