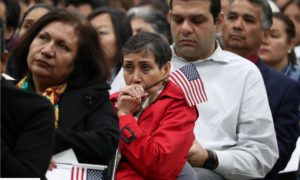 Families who have at least one member without a green card are fearful of using public benefit programs because of a Trump immigration policy, creating concern they may also avoid publicly available coronavirus testing and treatment.

The Urban Institute study found persistence of the chilling effect caused by the Trump administration’s public charge rule that expands the criteria for denying legal permanent residence applications based on past or potential use of government benefit programs.

Among adults in households most likely to be directly affected by the rule — those with at least one family member who was not a legal permanent resident — 31 percent reported avoiding benefit programs in 2019, compared to 21.8 percent in 2018.

The rule went into effect in February 2020, but early versions of it were leaked to the public, creating fear and confusion among mostly Latino immigrant families. Some dropped food stamps and assistance for young children and pregnant mothers, including health care, even though they or their children were eligible, as NBC News reported last year.

“That chilling effects observed in 2018 among immigrant families persisted into 2019 — and increased among families most likely to be affected by the public charge rule — is alarming in the unprecedented context of the COVID-19 pandemic,” the study’s authors stated. “Many worry that immigrant families may be afraid to enroll in public programs that expand access to medical testing and treatment for COVID-19, putting into sharp relief the public health risks of these chilling effects.”

More than one in seven adults in immigrant families, or 15.6 percent, said they or a family member avoided a non-cash government benefit program, such as Medicaid or Children’s Health Insurance Program (CHIP), Supplemental Nutrition Assistance Program (SNAP), also known as food stamps, or housing subsidies last year for fear of risking approval for legal permanent residence, or what is known as a green card, according to the study.

By Suzanne Gamboa for BC NEWS
Read Full Article HERE