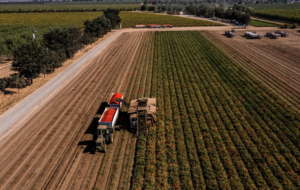 Farmers across the U.S. are joining a push for national immigration reform that they say could ease labor shortages and lower food prices as surging production costs continue to rock the agriculture industry.

The farm operators say the Farm Workforce Modernization Act, already passed by the House and pending in the Senate, will provide them with a stable reliable workforce by creating a path to citizenship for undocumented agricultural workers and reforming the seasonal farmworker visa program, among other things.

The current labor shortage, while not new, has been exacerbated by the pandemic and resulted in higher prices or empty store shelves for consumers. Food costs are now 10% higher than they were at this time last year, according to the U.S. Bureau of Labor Statistics.

“At a time when labor shortages are contributing to inflation and high food prices, it’s clear that we need the Senate to pass our Farm Workforce Modernization Act to stabilize the agricultural workforce and protect America’s food supply,” Rep. Zoe Lofgren, the California Democrat who sponsored the House bill, said.

But some worker groups oppose the measure, saying it does not include all immigrants and would further exacerbate power imbalances between farm owners and migrant workers.

The Senate version of the legislation, sponsored by Sens. Mike Crapo, an Idaho Republican, and Michael Bennet, a Colorado Democrat, would modify and further open up the widely used H-2A temporary work visa program to give undocumented farmworkers year-round work-based residency with an eventual pathway to citizenship.

It is still uncertain when the legislation will be presented for a vote in the Senate, but as labor shortages contribute to challenges in food production, the bill has received wide support from hundreds of farmers and agriculture groups.