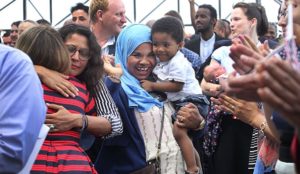 The bitter national debate over race and immigration, stoked by President Trump’s call that four Democratic congresswomen of color “go back” to other countries, seemed muted and distant Wednesday in a crowded hall overlooking Dorchester Bay.

Instead of discord, the scene at the John F. Kennedy Presidential Library and Museum was one of joy, excitement, and anticipation as 197 men and women from a potpourri of countries became new US citizens in a simple, poignant ceremony.

“It’s my distinct privilege, my honor, to extend to each and every one of you the most sincere, warmest, genuine welcome,” US District Judge William Young said. “You have made America stronger, more diverse . . . more gentle, more humane, more American.”

If a broad welcome for US immigrants has seemed less certain recently, the reception for these latest citizens pushed that issue to the background, at least temporarily. Applause filled the hall, miniature flags fluttered from dozens of hands, and a voter registration table was busy nearby with new citizens eager to join the democratic process.

“This gives me a chance to vote, and that’s what’s most important,” said Edward Lang, 39, a cybersecurity analyst who immigrated to the United States from the West African nation of Ghana. As a citizen, Lang said, he now has a chance at higher security clearances and better jobs.

Lang has heard the anti-immigrant rhetoric, but he dismissed much of it as political pandering.

“I understand that politics is what it is. It’s important that we do not feed that narrative,” Lang said.

“Be of good character. Be the best you can be. Show kindness,” he said. “That’s the answer to the negatives. Hopefully, it will drive away some of the hatred.”

Tong Yang, a 32-year-old engineer who emigrated as an infant from Thailand, also has heard the concerns. The son of a Thai soldier secretly allied with US forces during the Vietnam War, Yang said he understands the argument against immigrants who do not enter the country legally.