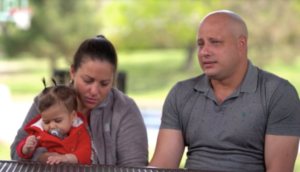 Brownsville, Texas — After a months-long trek across four countries, Dayana and Lazaro, two political dissidents from Cuba, reached the U.S. southern border in 2019 hoping to apply for asylum. But the spouses met starkly different fates.

Dayana, who was pregnant at the time, was allowed to enter and stay in the U.S. on humanitarian grounds. Lazaro, however, was sent back to Mexico and instructed to wait there indefinitely for his U.S. asylum court hearings.

Lazaro said he was not given an explanation for being turned back to Mexico. “It was difficult for me, because it was a forced separation,” he told CBS News in Spanish.

The Trump administration required Lazaro and 70,000 other asylum-seekers from Latin America to wait in Mexico while their cases were adjudicated. It argued the policy, known as Remain in Mexico, was needed to reduce unauthorized migration and discourage economic migrants from using the asylum process to enter the U.S.

Individuals and families with children were sent to some of the most dangerous and crime-ridden areas of Mexico. Hundreds were kidnapped, extorted, assaulted and even murdered, according to human rights groups. A sprawling and squalid migrant tent camp sprung up in the Mexican city of Matamoros and became a symbol of the Trump administration’s hard-line asylum policies.

Lazaro and Dayana said their separation took a heavy emotional toll. Dayana said she worried about losing her baby because of the adverse emotional impact of the separation.

“It was very difficult,” Dayana said. “I was very unwell for days. In fact, I was unwell for months. I had depression during the pregnancy. And I had postpartum depression as well.”