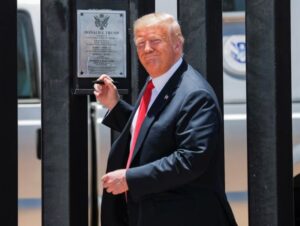 (Reuters) – President Donald Trump’s push to crack down on illegal immigration and overhaul the legal immigration system was at the heart of the Republican’s 2016 campaign and remained at the forefront of his White House agenda.

During four years in office, the Trump administration erected a multitude of new bureaucratic hurdles for immigrants seeking to enter or stay in the United States through policy changes – more than 400 by one count – including executive orders, regulations and revised internal guidance.

The changes have affected the lives of hundreds of thousands of people in the United States and around the world and aroused criticism at home and abroad.

Now, following his Nov. 3 election defeat by Democrat Joe Biden, the president is pushing to finalize restrictions in a last-gasp effort that could make it more difficult to reverse his policies.

Here are some of Trump’s most significant actions on immigration in the past four years.

TRAVEL BAN
Just days after assuming office in January 2017, Trump signed an order banning entry to immigrants from seven Muslim-majority countries, a move critics said discriminated against Muslims. A federal court blocked the initial ban, but in 2018 the Supreme Court upheld an amended version that has since been expanded to other countries. Biden has said he will reverse the ban.

REFUGEES
The Trump administration cut the U.S. refugee program to its lowest level since it began in 1980. The United States said it would accept just 15,000 refugees in the 2021 fiscal year, which began in October. Biden has pledged to raise that cap to 125,000.

Trump decided to end the Deferred Action for Childhood Arrivals (DACA) program put in place by the administration of President Barack Obama, in which Biden served as vice president. DACA protects immigrants, popularly known as “Dreamers,” who were brought to the United States as children but lack legal status.