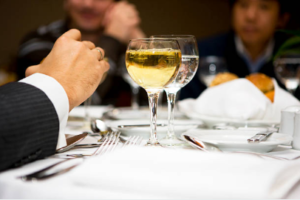 GLENS FALLS — The personal connection everyone has to immigration, even in a region as lacking in diversity as the Adirondacks, was the topic of discussion at this year’s Chapman Historical Museum fall luncheon.

Greenfield resident and invasion of Kuwait refugee Lauren Gomes Atwood spoke Monday about her immigration experience to more than 50 attendees at the museum’s event held at The Queensbury Hotel.

Gomes Atwood said her family stayed in Kuwait during the initial invasion in 1990 after two failed attempts to escape.

“We would turn off all the lights and slowly open the curtain and the popping noises were bombs going off,” she said. “You could see the ocean and field of fires. It looked like the country was on fire.”

They finally managed to flee with several other families after coordinating a bus to take them through Iraq and on to Jordan.

Her family returned to her parents’ home country, Bangladesh, where they faced the same hardships that led them to leave in the first place. Gomes’ last name, an indication of her ancestors’ conversion to Christianity by a Portuguese priest, made it hard for her parents to find work in the Muslim country.

After nearly two years in Bangladesh, her parents decided they could do better in the U.S., where they believed Gomes Atwood and her siblings would have the opportunity to succeed.

Her immigration story is a common one in the U.S., she said.

“Exposure creates empathy,” Gomes Atwood said. “I have found, when you’re exposed to someone with a certain experience, you are more likely to open your heart to things that are outside of your own experiences.”

Retired New York Supreme Court Justice David Krogmann also spoke at the event, telling of his experience as a second-generation immigrant, not far removed from his grandfather who made the journey here in the early 20th century.