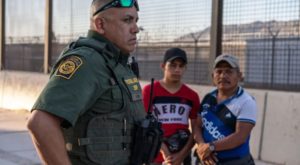 EL PASO, Texas (KTSM) — The role of law enforcement is under fire following many examples of excessive use of force, nationwide sweeps, and racial profiling that have caused injuries, deaths, and public distrust.

Along the border in cities like El Paso, the relationship between law enforcement agencies like ICE and Border Patrol and the community is particularly tense despite work to stop human trafficking, drug smuggling, and illegal immigration.

El Paso’s population is more than 80 percent Latino or Hispanic, and many are or have family members who are (at least at one point have at one point been), immigrants.

A new study in the journal Political Research Quarterly reports Latinos are disproportionately represented in law enforcement agencies like ICE and Border Patrol.

According to David Cortez, a professor of Political Science and Latino Studies at Notre Dame University, who interviewed Latino ICE agents in Texas, Arizona, and California, an interesting pattern regarding the immigrant experience and the role of law enforcement are challenging the ways Latino agents think about their identities.

The new La(tinx) Migra — which refers to the Mexican-American assimilation movement that began during the 1950s — raises interesting questions on the motivations of Latinos to work in immigration law enforcement.

“So we might say this is pretty representative of the broader community that ICE is charged with policing,” he says.

The fact that Latino representation among ICE agents in El Paso almost directly reflects the overall Latino population of the community being served challenges the identity of the agents.

Cortez says that Latinos have historically had a very fraught relationship with immigration law enforcement, especially in cities along the border.