Home Federal Enforcement Expelled From US At Night, Migrant Families Weigh Next Steps 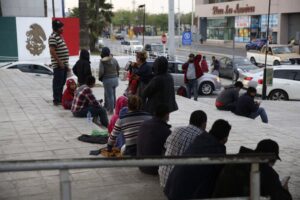 REYNOSA, Mexico (AP) — In one of Mexico’s most notorious cities for organized crime, migrants are expelled from the United States throughout the night, exhausted from the journey, disillusioned about not getting a chance to seek asylum and at a crossroads about where to go next.

Marisela Ramirez, who was returned to Reynosa about 4 a.m. Thursday, brought her 14-year-old son and left five other children — one only 8 months old — in Guatemala because she couldn’t afford to pay smugglers more money. Now, facing another agonizing choice, she leaned toward sending her son across the border alone to settle with a sister in Missouri, aware that the United States is allowing unaccompanied children to pursue asylum.

“We’re in God’s hands,” Ramirez, 30, said in a barren park with dying grass and a large gazebo in the center that serves as shelter for migrants.

Lesdny Suyapa Castillo, 35, said through tears that she would return to Honduras with her 8-year-old daughter, who lay under the gazebo breathing heavily with her eyes partly open and flies circling her face. After not getting paid for three months’ work as a nurse in Honduras during the pandemic, she wants steady work in the U.S. to send an older daughter to medical school. A friend in New York encouraged her to try again.

“I would love to go, but a mother doesn’t want to see her child in this condition,” she said after being dropped in Reynosa at 10 p.m.

The decisions unfold amid what Border Patrol officials say is an extraordinarily high 30-day average of 5,000 daily encounters with migrants. Children traveling alone are allowed to remain in the U.S. to pursue asylum while nearly all single adults are expelled to Mexico under pandemic-era rules that deny them a chance to seek humanitarian protection.