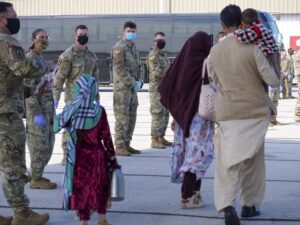 Exodus Refugee Immigration, a nonprofit resettlement agency based in Indianapolis, plans to open a resettlement office in Bloomington by the end of the year, executive director Cole Varga said.

Varga said the organization is a partner of the national program that helps resettle refugees each year. He said Exodus is one of 200 to 300 agencies across the country that take small groups of all the refugees who come into the United States each year. The office will help these refugees get settled in their new community by arranging new apartments, enrolling them in language classes and helping them find jobs.

Varga said Exodus’s Bloomington site was approved by the U.S. State Department in September. He said many positions need to be filled before the office opens, including case managers, employment specialists and an outreach coordinator.

“Initially, the original timeline was to start next March, but the added urgency to helping assist the Afghan evacuees caused the rampup,” Varga said.

Varga said the timeline was sped up due to the added pressure to assist the Afghan refugees.

Exodus would love to work with IU in many different ways like internships, Vargas said. He said these internships are a great way for students to get involved in the organization.

Elizabeth Cullen Dunn, IU professor and Exodus board member, said IU students who get involved with Exodus could have the possibility to complete service projects or help to practice their language skills with people who speak these languages natively.

Bloomington Refugee Support Network, a volunteer organization that currently helps refugees and asylum seekers here in Bloomington, is also willing to assist Exodus, said Dunn, who is also the director of BRSN.

“We are willing to help fill in spots for Exodus where they do not have the staffing capacity or funding, ” Dunn said.