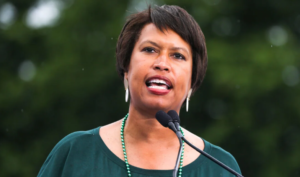 As busloads of illegal immigrants sent by border states Texas and Arizona make their way to the nation’s capital, D.C. Mayor Muriel Bowser is feeling overrun.

Bowser on July 28 formally requested deployment of the National Guard to deal with the influx of illegal migrants as she claimed her city, the nation’s capital, was at a “tipping point.”

“This is a very significant issue,” Bowser acknowledged in mid-July in a letter to Defense Secretary Lloyd Austin. “Our collective response and service efforts have now become overwhelmed.”

The call for help comes after Bowser and other Democratic politicians initially downplayed the massive wave of illegal immigrants flooding across the nation’s southern border and had done everything in their power to exacerbate the crisis.

President Joe Biden has made opening the southern border a priority by proposing to rescind his predecessor’s “Remain in Mexico” policy for asylum-seekers and to revoke Title 42, a rule that allows the government to quickly deport illegal immigrants over public health concerns.

Now that the problem of illegal immigration is in Bowser’s backyard and that of New York City Mayor Eric Adams, they’re seeing what it’s really like.

Bowser is experiencing a minuscule fraction of the problem that Texas is suffering through daily with illegal immigration, but she’s still complaining.

CNN reported that a little more than 5,000 illegal immigrants have arrived in the District of Columbia to date. As of the end of June, the Border Patrol had logged more than 2 million encounters at the southern border since the beginning of the fiscal year last Oct. 1.

Bowser isn’t the only Democratic politician moaning about being inundated with a flood of migrants.

Adams, whose city sought to allow illegal immigrants to vote in municipal elections, before the measure was struck down, also begged the federal government for aid.