Home Federal Enforcement EXCLUSIVE: Biden Administration To Release 400 Migrant Families Per Day By June, Up From 50 In January 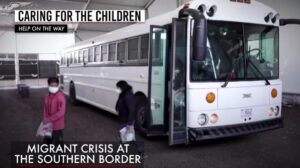 The Biden administration anticipates that it will be releasing 400 migrant families into the country a day by mid-June as the influx of people encountered illegally crossing the border overwhelms its detention capacity, according to a government planning document.

The 400 figure is eight times greater than the 50 families that Border Patrol and Immigration and Customs Enforcement were releasing from its facilities each day early on in 2021. As of mid-March, Border Patrol agents were seeing 500 people arrive as part of a family group per day.

“The number of individuals enrolled in the ICE Alternatives to Detention program has increased from 50 per day to 200 per day in March 2021,” an ICE document states. “Within 90 days, the enrollment is projected to double to 400 per day. It is because of this unusual and compelling urgency that the Government requires the [emergency family reception sites] to meet the critical mission requirements of housing, feeding, transporting, and providing medical attention to these thousands of asylum-seeking families along the southwest border.”

Only the head of family is enrolled in ICE’s programs that track people after they are released or paroled into the country, so the total number of migrants released is at least two times higher than the 400 figure because each family has at least two people.

In the final months of 2020, the number of people who were intercepted at the border hovered around 75,000 per month. By February, the first full month that President Joe Biden was in office, that monthly number had grown to more than 100,000. In March, the number of families, adults, and single children showing up at the border spiked to 172,000.

“DHS is seeing an increase in irregular migrant flows to the southwest border of the United States, including greater numbers of family units and unaccompanied children,” the document states. “The projected encounters for fiscal year (FY) 2021 are expected to be the highest number observed in over 20 years.”