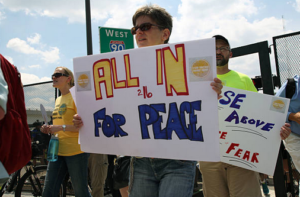 Senator Elizabeth Warren sharply criticized the Trump administration and congressional Republicans for straying away from American values in their handling of the opioid crisis and family separations at the border during a Saturday town hall meeting in the South End.

“This isn’t about politics,” she said,standingon stage at the Benjamin Franklin Institute of Technology. “What it means to have values is you hold onto them, and you hold onto them whether people agree with them or not.”

The Cambridge Democrat opened the event by reminding the crowd of about 300 people that it was the one-year anniversary of the Republicans’ failure to repeal Obamacare in the US Senate. She encouraged the audience to remember the power of their collective voice.

Warren then spoke about the federal government’s approach to solving the opioid crisis, which she compared to the handling of the HIV/AIDS crisis during the 1980s. On average, she said, 115 people die from overdoses every day.

Warren said that when she told Republican lawmakers that legislation she introduced would provide $100 billion over a 10-year span to states and communities to combat the opioid crisis, their response was “we can’t afford it.”

“This is a crisis the Trump administration is saying costs us a half a trillion dollars a year and we can’t spend $10 billion a year to fight back?” Warren said she asked congressional Republicans. “You just gave away a trillion and half dollars to billionaires and giant corporations and in return there’s no money to help with this crisis?“

During the question-and-answer portion, Warren was asked about the possibility of Puerto Rico achieving statehood. She said that because of its status as a territory, Puerto Rico is unable to legally deal with its $73 billion debt, and she is working on two bills to help with that.