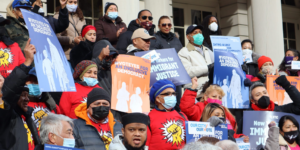 Like in 2020, this year’s midterm results are likely to remain unclear after election night, but polls and research points to what issues were driving voters’ decisions.

Throughout this midterm election cycle, Republicans have made immigration a central issue in their campaigns, while the Biden administration and Democrats tried to avoid highlighting it.

Research findings from an ad tracker by the advocacy organization America’s Voice identified that within 3,200 paid communications from the Republican party and its allies, more than 600 spread the myth of an open border and over 600 connected migrants with drug trade.

In all, Republicans spent about $38.8 million on over 380 television ads focused on border security and immigration, found AdImpact, a media tracking firm. The Democratic Party spent only $5.5 million. More than half of Democrats’ spending total —$3.7 million— came in Arizona’s Senate and gubernatorial races.

The GOP’s continued focus on centering immigration underscores the findings from 2018 research that posits that people are more likely to vote for Republicans if their perceived cost of an increase in immigrants is larger than their perceived benefit.

That was exemplified last night when Florida’s incumbent Gov. Ron DeSantis re-election after a campaign spent condemning migration. Many counties in state that voted for President Biden in 2020 shifted to the right in the Senate and governor’s races.

But while the GOP worked persistently to make immigration a central issue during this election, an election poll suggests it’s not a top priority for voters when compared to the economy and inflation.

An election poll led by the African American Research Collaborative, which targeted over 12,000 voters in the final days before the midterms, shows that immigration was not a top issue for voters. Instead key issues — indicated by White, Black, Latino, Asian, and Native American respondents — were rising cost of living; price of gas; women’s reproductive and abortion rights; cost of health care; and reducing crime.